Took a trip back home recently for a wedding. Was great being back in old Chi-town.
Here are a few of the highlights:
1) Took my daughter out to dinner
2) Watched part of a highschool football game (the kid fumbled the ball on the kickoff, a old man leaned over to me and said 'he mustve been staring at the lights on that one')
3) Went to Second City (home of Bill Murray, John Candy, Tina Fey, Steve Carrell, Chris Farley to name a few)
4) Had drinks on the 24th floor - saw a old Chicago buddy who just happened to me in town the same night
5) Visited my old college and was shocked to see a small shrine dedicated to me (see pic below)
6) Met old friends at Navy Pier (even Cappy from Robots showed up!)
7) Went to see Cloudy w a Chance of Meatballs in IMAX (funny movie w alot of sick food jokes)
8) WhiteSox vs Royals. Sox won - 13 to 3 off of a Grand Slam (ate lots and lots of junk food- ugh, not feel well!)
9) Went to see another film (Mr Matt Damon 30 lbs heavier)
10) Ate at one of my favorite sub places - PotBellys across from the Chicago theatre
11) Went to the church for the wedding (Congrats Dave and Jess!)
12) ran in the rain to Nookies for some soup.
13) went to the reception for alot of drinking and dancing (and photobooth pics - see below)
14) House of Blues at 2am
15) Jogged Lakeshore Avenue past all the Bears and Pittsburgh Steelers fans (so badly wanted to make fun of the Steelers fans but was chicken)
16) Went to Bennigans and ate a fried sandwhich (remembered why I was 50 lbs heavier when living in Chicago)
17) Bought 3 Chicago t-shirts to let people in San Fran know "IM A CHICAGOAN"
18) Placed post-its everywhere I went (got a email from a couple who saw one of them in a restuarant saying 'they loved thedailypostit.com site')
19) Sat between two people because I keep forgetting to check in early on SouthWest
20) Hugged my beautiful wife and boy when I arrived home
WOW. That was alot. 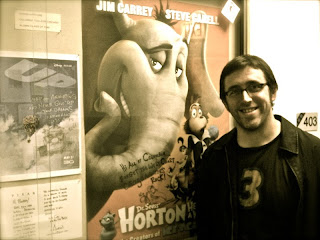 Columbia College made a display full of my films I worked on.

Always advertising thedailypostit.com, even at a wedding. Shameful! 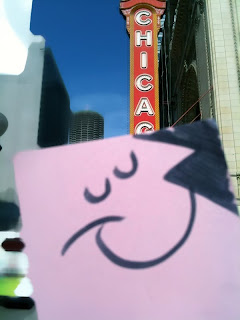